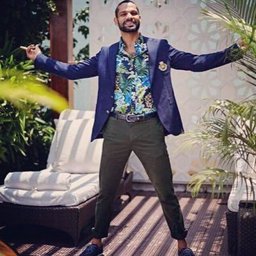 Shikhar Dhawan (born 5 December 1985) is an Indian international cricketer. He is a left-handed opening batsman and occasional right-arm off break bowler, who plays for Delhi in domestic cricket and Sunrisers Hyderabad in the IPL. He played for the Indian Under-17 and Under-19 teams before making his first-class debut for Delhi in November 2004. He was the player of the tournament and leading run-scorer at the 2004 Under-19 Cricket World Cup with 505 runs, a record for most runs in a single Under-19 World Cup that still stands.

Dhawan made his One Day International (ODI) debut against Australia in October 2010 at Visakhapatnam. His Test debut came against the same opposition in March 2013 at Mohali where he scored the fastest century by any batsman on Test debut (85 balls) and ended his innings with 187 runs from 174 balls. He was the leading run-scorer and the Man of the Tournament of 2013 ICC Champions Trophy in England, which India won. In August 2013, he recorded the then second highest individual score in a List A match when he scored 248 runs off 150 balls for India A against South Africa A at Pretoria. In November 2014, he became the fastest Indian batsman to reach the 2000-run mark in ODIs.