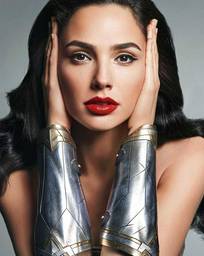 Gal Gadot-Varsano (Hebrew: גל גדות‎ [ˈɡal ɡaˈdot]; born (1985-04-30)30 April 1985) is an Israeli actress and model. At age 18, she was crowned Miss Israel 2004. She then served two years in the Israel Defense Forces as a soldier, whereafter she began studying at the IDC Herzliya college, while building her modeling and acting careers.Gadot's first international film role came as Gisele Yashar in Fast & Furious (2009), a role she reprised in several subsequent installments of the film franchise. She went on to achieve global stardom for portraying Diana Prince / Wonder Woman in the DC Extended Universe, beginning with Batman v Superman: Dawn of Justice (2016), followed by the solo film Wonder Woman (2017), the ensemble Justice League (2017), the sequel Wonder Woman 1984 (2020), and the alternate cut Zack Snyder's Justice League (2021).Gadot has been dubbed the "biggest Israeli superstar" by local media outlets. Time magazine named her one of the 100 most influential people in the world in 2018 and she has placed twice in annual rankings of the world's highest-paid actresses.