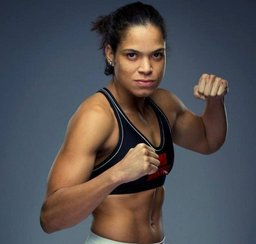 Amanda Lourenço Nunes (born May 30, 1988) is a Brazilian professional mixed martial artist. She currently competes in the Ultimate Fighting Championship (UFC), in which she is the reigning champion of the women’s Bantamweight and Featherweight divisions. She is the first woman to become a two-division UFC champion, and the third fighter in UFC history to hold titles in two weight classes simultaneously, after Conor McGregor and Daniel Cormier. She is also the first and only fighter in UFC history to defend two titles while actively holding them. Nunes is widely regarded as the greatest women's mixed martial artist of all time. As of June 2, 2020, she is #1 in the UFC women's pound-for-pound rankings.

Amanda Lourenço Nunes
The Lioness
Brazil / Brazilian
Single
US $1 million
2008
Mixed Race
Brazilian
Salvador - State of Bahia, Brazil Map
Salvador - State of Bahia, Brazil Map
New Jersey, USA Map
Gay, Lesbian
5′ 8″ (1.73 m)
≈130-140 lbs (59-64 kgs)
Brown
Dark Brown, Brunette
Yes
Right Handed
Amanda Lourenço Nunes is a Brazilian mixed martial artist who currently fights for the Ultimate Fighting Championship (UFC) where she is the reigning UFC Women's Bantamweight champion. Source
Nunes grew up in a small town outside of Salvador, Bahia, Brazil. She started training in karate at age four and pursued training in boxing at the age of sixteen. She first competed in Brazilian jiu-jitsu after being invited to a dojo by her sister, who also trained in the sport. Source