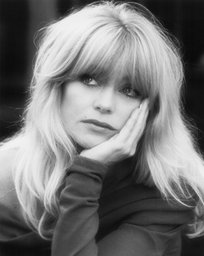 Goldie Jeanne Hawn (born November 21, 1945) is an American actress. She rose to fame on the NBC sketch comedy program Rowan & Martin's Laugh-In (1968–1970), before going on to receive the Academy Award and Golden Globe Award for Best Supporting Actress for her performance in Cactus Flower at (1969).

Hawn is the mother of actors Oliver Hudson, Kate Hudson, and Wyatt Russell, and has been in a relationship with actor Kurt Russell since 1983. In 2003, she founded The Hawn Foundation, which educates underprivileged children.