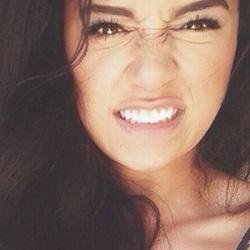 Tina Woods, popularly known by her online alias "Too Turnt Tina", is a comedic Vine video creator. She became a social media star after she crossed one million followers on Vine in early 2014. She currently has over 2.5 million followers on the video sharing platform. Starting with Vine, she soon moved to YouTube, where she posts vlogs, "how to" videos and fashion videos. She has already gained nearly half a million subscribers on her YouTube channel. She later joined the live broadcasting platform YouNow and has gathered an impressive 244k fans. In 2016, she was nominated "YouNower of the Year" for the 8th Annual Shorty Awards. To serve as an extension to her brand, she designed and released a limited edition clothing collection exclusively on eLUXE in December, 2014. She was part of DigiTour 2014 and appeared in San Antonio and Houston with Jack Gilinsky and Jack Johnson. She has been a part of the PressPlay tour along with a number of other social media influencers, and also released her own merchandise from PressPlay. She was recently invited by Disney to Pixar Studios where she went with her friend Amber and recorded her day on a YouTube video. She was also provided with sponsored Toy Story themed gears by VANS for the occasion.