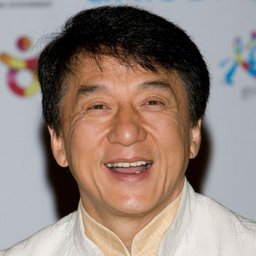 Datuk Fang Shilong (Chinese: 房仕龍; born 7 April 1954) , born Chan Kong-sang (Chinese: 陳港生 listen) and known professionally as Jackie Chan, is a Hong Kong actor, director and martial artist known for his slapstick acrobatic fighting style, comic timing, and innovative stunts, which he typically performs himself. Chan has been acting since the 1960s, performing in more than 150 films. He is one of the most popular action film stars of all time.Chan is one of the most recognisable and influential film personalities in the world, and he gained a widespread

global following in both the Eastern and Western hemispheres. He has received fame stars on the Hong Kong Avenue of Stars and the Hollywood Walk of Fame. He has been referenced in various pop songs, cartoons, films and video games. He is an operatically trained vocalist and is also a Cantopop and Mandopop star, having released a number of music albums and sung many of the theme songs for the films in which he has starred. He is also a globally known philanthropist and has been named as one of the top 10 most charitable celebrities by Forbes magazine. In 2004, film scholar Andrew Willis stated that Chan was perhaps the "most recognised film star in the world". In 2015, Forbes estimated his net worth to be $350 million, and as of 2016, he was the second-highest-paid actor in the world.Since 2013, Chan has been a pro-Communist politician, serving in the Chinese People's Political Consultative Conference. After the Hong Kong electoral reform in 2021, Chan became an Election Committee's member and could vote for the Chief Executive.