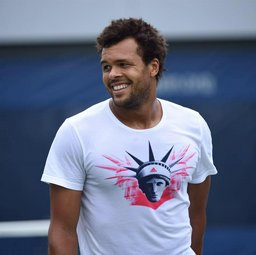 After being awarded the ATP Newcomer of the Year for 2007, Tsonga rose to fame by virtue of his performance in the 2008 Australian Open when, as an unseeded player, he reached the final, having defeated four seeded players along the way, including a straight-sets win over world No. 2 Rafael Nadal in the semifinals. Tsonga eventually lost to the world No. 3 Novak Djokovic in the final in four sets, after winning the first set; it was the only set Djokovic dropped during the tournament.

Tsonga followed this up by winning his first ATP Masters Series championship at the 2008 Paris Masters, thus qualifying for the 2008 Tennis Masters Cup in Shanghai, China. His best performances in a major tournament since 2008 are semifinal appearances in the 2010 Australian Open, the 2013 and 2015 French Opens, and at Wimbledon in 2011 and 2012. He also reached the final of the 2011 ATP World Tour Finals, where he lost to five-time and defending champion Roger Federer. He achieved his second Masters Series win at the 2014 Canadian Open, defeating four top ten players on the way to victory. This meant that this was the first time a member of the Big Four had not won the Rogers Cup since Andy Roddick in 2003. This feat also made him the first player to defeat Djokovic, Murray, and Federer in the same tournament. On top of his Masters Series victories, Tsonga also reached the final of the 2011 Paris Masters and the 2015 Shanghai Masters — losing to Roger Federer and Novak Djokovic respectively. To add to this, he won the 2009 Shanghai Masters doubles title with partner Julien Benneteau. In 2017, Tsonga helped France to their first Davis Cup win in 16 years after previously being beaten in 2014.

He has reached the quarterfinal stage of all four Grand Slams. He is also the first and one of only three players (the others being Tomáš Berdych and Stan Wawrinka) to have Grand Slam wins against each of the Big Four (namely Roger Federer, Rafael Nadal, Novak Djokovic, and Andy Murray).